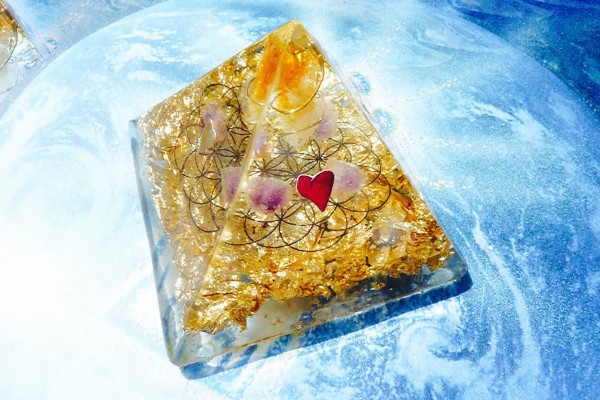 Awareness is ‘dropping in’ that I’ve never ‘thought of’ before… Fascinating. There was something about a triangle standing upright, in ‘Glimpses of Your Soul’, that ‘didn’t quite work’ for me. Of course…seeing the triangle reaching to the sky was only the first piece. There are other triangles that come together make up a pyramid.

Early morning hours breathe in more of the Mystery. First comes the Awareness that there is a Trinity in this, Spirit, Soul and Body. Each one has a different, even predominant focus for me at different stages of my life. I know that Spirit, Soul and Body, embodied human experience, are all sides of my pyramid.

Yet, in my still-fuzzy awareness, a ‘wondering’ about whether there are three or four sides to a pyramid ‘shows up’. I have several sacred symbols of pyramids on the bookshelves downstairs. I’ve been to Egypt, ‘seen the pyramids along the Nile’. My left-brain is ‘checking in’… Downstairs, I pick up my favorite crystal multi-colored pyramid. Obviously, a pyramid has four sides. What wasn’t clear was the ‘forth’ side. What does it represent?

(I have not yet realized that I wrote the word ‘forth’, not even aware that the word ‘forth’ and ‘fourth’ have different meanings. Weeks later, I will look up the word ‘fourth’, realizing it is different from the word ‘forth’. I will find that ‘fourth’ can relate to a musical interval embracing four tones of a diatonic scale. My ‘one-time music-major mind scrambles trying to remember what ‘diatonic’ means.

In this immediate moment, “Go forth and live it” drops in, an invitation that I gave, standing in the back of the sanctuary, at the end of every Sunday morning service for 19 years. It was the last part of the ‘Closing’ that included the ‘Prayer of Protection’ by James Dillet Freeman, Unity’s poet. One of the astronauts took a copy of that prayer to the moon, and left it there in a space capsule.

(Are the words fourth and forth inter-related? ‘Forth’ means to ‘go onward’ in time, place and order. What are the ‘orders’ of the fourth dimension and beyond?)

It feels like It’s all there in its Wholeness, always already, in my life. And yet there have been different phases, different ‘developmental stages’, of ‘growing up’ and of ‘waking up’. The ‘growing up’ years of my childhood and teens are one of the Faces of Love, one of the faces of my pyramid. Yet, I realize, of course, that I never ‘thought about development’, or anything like a ‘Matrix of Seven or Ten Year Cycles’ during that time! And, it was happening anyway.

A subtle shift somehow seems to occur as we move toward our early adult years. There is more ‘attraction’ to dreams of our future. They often include education and what may be needed for ‘work’ or ‘career’. Attraction also includes the energy of love and looking for someone with whom to share love. These are pieces of another, yet different, Face of Love for me, where marriage, childbirth, having your own home and jobs entered. This feels like the second of the faces of my pyramid.

One of my ‘Faces of Love’ has such a pure focus on Spirit, an experience that I refer to sometimes by saying, “I know I’ve been to the mountain-top…” It includes all the years of co-leading Silent Meditation retreats with one-hour ‘sits’, several times a day. The Opening Prayer of Sunday services had an ‘Invocation’ of “Come Holy Spirit, come upon us, fill us with your Presence, fill us with your Power…” It is the third of the faces of my pyramid and It is still Sourcing me always.

Yet, for me, the ‘mountain-top’ clearly was not the end of the journey. I’ve always taught that this ‘movement’ transcends and includes. There are changes, the good, the true and the beautiful, the unexpected and the difficult, as we explore our Unknown territory called life. We learn lessons and we experience Gifts of Amazing Grace. Dissolve happens and new creation emerges, even as we ‘go about’ maintaining our lives.

What I seem to be living now is somewhat different. I’ve called it “Coming back into the marketplace with Gift bestowing hands.” Sometimes I say, “I live the Stillness now.” As I scribe this, I realize that this is the fourth side of my pyramid, another of the Faces of Love. It is living with ‘vertical awareness’ all of the ‘Colors of the Rainbow’, seeing the beauty of each of the colors in my own life and in the lives of people that have been significant in my pyramid taking form. And, it is in the lives of people beyond, even in the world itself.

This brings in the next piece of Knowing, a very important one. We are moving with Radical Trust toward the third Code of Divine Imagination. We are still in the Invisible realms, still in Timelessness. The Descent of the Holy Spirit is still dominant. Distinctions relative to time have ‘permeable boundaries’. There are ‘parallel realities’ existing simultaneously.

In the coming fourth Code of Divine Will and Understanding, the Ascent of the Soul will begin to take a more dominant focus in our awareness. Yet here, as we approach the jade table in the ‘garden amidst the flames’, we access the Divine Architect within. We sit at the ‘drawing board’ of our Minds open to Spirit, waiting…

There may ‘seem to be separation’ in time, relative to when things ‘appear’ in awareness or form. Yet within this realm of parallel universes, we are ‘seeing’ only the part of the movie that is playing through our human eyes and consciousness.

I first ‘tapped into’ this ‘Knowing’ when I was teaching high school in the late 1970’s. Somehow I got a book, copyright of 1975, called ‘Space-Time and Beyond’ written by Bob Toben, in conversation with physicists Jack Sarfatti and Fred Wolf. It had cartoon-like pictures, making it delightful and easy to read.

One page, with its drawings, especially caught my attention: “For each of us, an indefinite number of universes exists simultaneously”. It was on page 25… We ‘see’ a typical universe layer and call it ‘real time’. Yet there are unseen layers. Each universe has its own time sequence. Each universe may be a slight variation of the next one or may be entirely unrelated.

I would later hear Fred Alan Wolf speak at a Unity conference and I would invite him to come and teach at both Unity of Walnut Creek and Unity of Tustin. He was, by then, the author of ‘Parallel Universes’, written in 1988. He is now well known for his many books on quantum physics and also for his participation in the movie ‘What the Bleep Do We Know?’ Intersections in time can be quite profound…and delightful!

PRACTICES:   BRINGING YOUR LIFE INTO THE CURRICULUM

In this ‘Timelessness’ realm, you will simply sit with a pen in your hand, being open and ready to ‘scribe’ what comes. This is not about ‘thinking it’ with your intellect, not about trying to ‘figure it out’. The realm that we are accessing is Beyond your human mind. It is the realm of Divine Mind and Radical Trust. There is a Knowing coming out of Faith in the Unseen. It gives us what I often call Downloads. Charles Fillmore, the co-founder of Unity, called it Divine Imagination.

When it ‘drops in’, it will come as ‘glimpses’, sort of like pictures or symbols perhaps. It will not include details…those will come later with the use of the rational mind that is good at filling in details. The intellect will become a ‘servant’ to this Higher Mind.

What are the Four Sides of Your Pyramid?

The first FACE OF LOVE: The ‘growing up’ years of ‘childhood and teens’ perhaps, dreams of your future, maybe including school, college or the world of work, of career…   Pause for a moment and see what comes…

The second FACE OF LOVE: The years of your 20’s and 30’s perhaps, including stepping into education and career. It will include love and looking for someone to love, which could have even begun in the earlier years. Marriage, childbirth, home, jobs, significant events and interests will be ‘imprinting’ you and potentially be part of guiding you and shaping your life.   Pause for a moment, and see what comes…

(If you are ‘not here yet’, in any of these years or decades, just know it as a parallel reality, a potentiality…  See what comes, knowing you will have choice.)

The third FACE OF LOVE: The years of your 40’s and 50’s perhaps, including a feeling of being drawn to more of a focus on Spirit. An attraction to meditation, spiritual practice, and often a feeling of being ‘Called’ may occur. Age 40 can be somewhat of a ‘marker’ or a shift, it seems. Sometimes we are more able to do this as ‘house-holder’ years may become somewhat less demanding. Pause, see what comes…

The fourth FACE OF LOVE: The years of your 60’s and 70’s and beyond perhaps, including serving, giving of your Gifts, guiding others with gifts of wisdom and love. It involves a Knowing of how to be ‘in the world and not of the world’. There may be a dissolving of the ‘importance’ some of the previous things that had focus in our lives. Values may seem to become more Clear, with choices toward giving and Simplicity.  Pause, see what comes…

This is sort of like seeing the Preview of a movie… Don’t try to make it more than that… Just see what ‘comes’, what ‘drops in’. Scribe it, with no attachment to outcome. This is NOT about ‘goal setting’… This is work in the Invisible realms of your soul, in Timelessness. It will come more like a Knowing, perhaps like bringing something ‘back’ from Future Time.