November 10, 2015 by Marj Britt Blog, Your Life as a Sacred Love Story 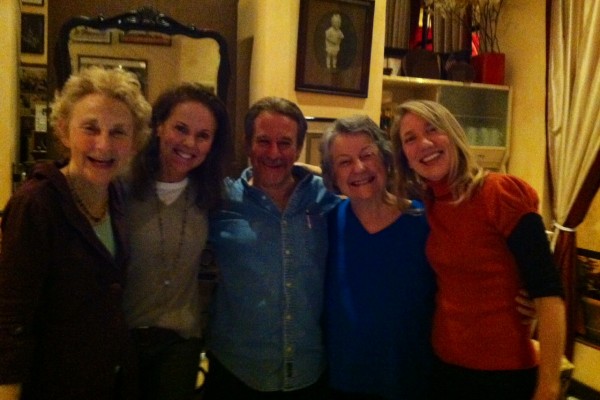 What words do you associate with “Endings”? Pause for a moment and see what drops in. For me, sometimes words like grief, or confusion, sadness, disappointment and even anger, chaos or fear have been there. Sometimes they were associated with endings that I did not want. Other times, I did…and yet there was a strange sort of ‘mixed sadness and delight’.

October 31st was the ending of daylight savings time in the United States. It happened at midnight. In the morning when I awakened, my computer ‘time’ was already into the ‘new beginning’ of standard time. Even so, it took me a few hours to ‘catch up’, adjust different clocks and calendars, and even my own ‘body rhythms’.

Last week Fabienne and I flew to San Francisco for the last ‘in-person’ gathering of a year-long journey into the Inter-Subjective We Space with an amazing group of souls. It was a journey that I was very excited and delighted to be a part of, it held the mystery of anticipation and hope of ‘finding my new tribe’, something I had been yearning for.

My magnificent experiment was an amazing journey, full of many surprises. The paradox of my surprises was that what I had imagined it could be never happened, and disappointment was a part of that. Simultaneously, over the year, experiences and things emerged, including incredible people that I simply loved, became part of my life that will be forever. This held absolute Joy and Delight for which I constantly felt deep levels of Gratitude and Absolute Love.

Yet, even as I prepared to go, I knew it would be an ‘ending’ for me. I was clearly guided not to go on with the next year. It was a decision, in part, that was more about my ‘band-width’ of time and treasure. It came with a knowing that I was called to prioritize, to let go of things in a way that cleared my energy field to be available for a Vision unfolding that is in the process of moving from the Invisible to the visible.

So, it was an ending for me, yet an ending of another kind. The people that I’ve gotten to know deeply, admire and respect will forever be a part of my heart. That will never change. There is such deep Awareness of Gratitude and appreciation for the beauty of the moments we shared, both in the four times of the three-day gatherings and in the more private moments of the in-between telephone calls, the lunches and dinners when we were together.

Patricia Ellsberg has become my cherished friend, hosting me in her home each of the extended weekends that I was there. Even the Bart rides and the car trips back and forth to San Francisco from Berkley became delightful adventures. We share the same Bhakti energy of Love and I felt It, recognized It as a Rare Gift.

My life has been rich in ways that are different and beyond my life before this magical, yet still in some other ways disappointing year. It’s strange how the two polarities can exist simultaneously together.

Even beyond is a Realizing that the “looking for my next tribe’ has somehow shifted. In the deep work with the StAGES Inventory and with Terri O’Fallon, whole new levels of Awareness popped into Clear Seeing. They have always been there…yet now in a sort of ‘Living Color’ way, defined with words and Awareness coming from a kind of ‘map’ of the territory! My ‘next tribe’ is the world, even Cosmic Awareness.

With a bit of a smile, even while feeling some of the ‘parallel universes’ part, I realize that more and more it is not an experience where I’ve known “about it” for years. Now it feels like I am breathing it… And it feels very ordinary.

I’m talking with and beginning to work with Terri O’Fallon on something that I couldn’t have even dreamed of a year ago. We are developing a Love StAGES Inventory that will explore Love in the stages of our lives. I am feeling Awe and Wonder and Joy even in the possibility of this emerging!

In some strange way it seems interrelated to and several levels uplifted from my doctoral dissertation at U Mass on the lives of ‘high success’ women and men. Sort of a stages upgrade from success to Love…even while honoring, celebrating and exploring all of the Faces of Love through all of the years and experiences of our lives. A part of me feels so ‘drawn’ to the Love Stories that have shaped our lives.

I’ve always described one of the essential pieces of Called By Love as being ‘in ordinary language for ordinary and extra-ordinary people’. I realized that as we did our last HUB gathering in San Francisco, that my HUB group of five people were all Luminaries who exemplify Living Life as a Sacred Love Story. It all just ‘dropped in’; it is a series of dialogues, maybe like an Advent season of Hope, Love, Joy and Peace.

I’ll use the picture we took together for this blog…to Announce Its Coming!

Take some time to be in the Stillness and simply let your own ‘downloads’ come. How have Endings played in your life? How can you see them as sequences, or ‘chapters’ in perhaps a series of stories about the Mystery of Love in your life?

Is there a ‘strange way’ in which it is interrelated where you can see the ‘uplift’ from one level of focus, value structure or ‘mind-set’ to another? Some of the ‘Faces of Love’ may remain the same, some may change… Just explore ‘How It Works’…