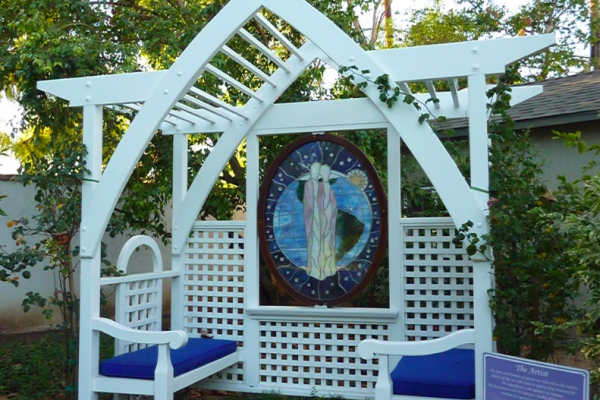 There have been only a few times in my life when “Big Dreams” have awakened me in the middle of the night. One of those came probably three decades ago, only a couple of years after coming to Unity of Tustin.

One of the ‘instructions’ often given for remembering dreams is to keep a pen and pad of paper by your bed, so if dreams come, you can ‘wake up’ long enough to record them. It was during one of the ‘phases’ of doing that when it happened.

In the dream was the Cosmic sky with the earth visible, like the photograph of the earth taken by one of the astronauts on an Apollo space mission. Standing in front of the earth, spinning in space, were two non-identifiable Beings of Light, radiating Light out to all of the visible earth.

There was a Voice that I speak: “You have received the seeds of the Universe in the womb of the Divine Mother. You are bringing forth, giving birth to the manifestation.”

The Voice awakened me long enough to realize it was a Big Dream, one I would want to remember. I picked up the pen and paper, drew a circle for the globe, drew two stick figures in front of it, and scribed the words… It would be just enough to jog my memory in the morning. Then I rolled over and went back to sleep.

Only when I saw the note paper, the drawing and the words on the nightstand when I awakened from sleep the next morning, did I remember…

The next day, I showed the piece of paper from the small notepad to a friend who was a graphic artist. He often helped me on ministry projects. I asked him if he would create a picture I could frame, a symbol I could gaze at, knowing it would imprint deeply. And I also asked him to change the “you” to “we”. I wanted the spiritual community to know this was a dream that I knew was for all of us, not just for my personal self.

That large framed picture is still on the wall, just opposite where I am sitting now in my meditation chair. It has been a symbol that I have used in talks and teaching. It became the beautiful very large stained glass image that is the centerpiece of the Meditation Garden for Site Six, the 6th day or stage of creation.

It became the logo for the telesummit on www.LivingLovingLegacy.com and is on our website, www.CalledByLoveInstitute.com now. It goes around the world.

The theme of the 6th Stage of Creation is Love and Wisdom, the Mystical Union. It is about the Inner Mystical Marriage, the marriage between the Divine Feminine and the Divine Masculine within us. And, it can attract that in our outer lives if it is part of our soul’s destiny path.

What I know is that the “manifestations” have been coming ever since. It is a different kind of manifestation, however, not originally coming from the human rational mind. It is like an energetic Field, for those who have the ‘eyes to see’.
It attracts people who recognize it. And it brings ‘blessings upon blessings’.

Often souls will come and sit at the garden site, on the benches that are on either side of the stained glass image, or on the stone bench opposite it. They come for healing sometimes. Other times they come just to Know the Field of Love that is there. For me, it is an exquisite Knowing of the visible and Invisible as One.

There are so many examples and so many manifestations in the three decades since it came in the dream. Over time, I’m sure more will come as part of what will be shared in what I realize to be sacred communion.

The symbols come, with a kind of Invitation to say ‘Yes’ to the Beloved of your Soul. It is ‘of a different kind’, very Deep, intense and yet, non-demanding. There is, for me, an Awareness of Choice-less choice with dimensions of Timelessness, as well as time. There is Mystery, revelation, heaven and earth.

Open to experience moments or times when you know symbols have been given to you. You recognize them, even though they come from, somehow, beyond the rational mind.

These kinds of moments can happen in dreams, or in states of Stillness such as in Silent meditation. They can also come in unexpected moments in nature or in the experiences that bring Awe, a feeling of a bliss-like state.

At the time, it is unlikely that you will know ‘what they mean’. They are like glimpses into other-worldly Awareness.

I invite you to create some symbol, like the framed picture, that you will look at often, it will somehow imprint in a deeper way.

Over time, sometimes after many years, it will often reveal Itself to you, fill in the details then, that you could not even have imagined or understood when it first came.

Most of all, know that you are in the experience of Living the Mystery.